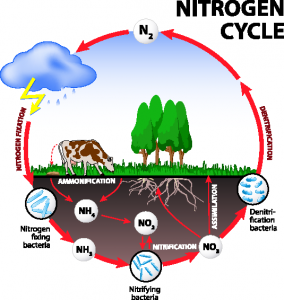 $50/ha free nitrogen up for grabs!

The biological fixation of nitrogen from a gas in the air to a solid form in the soil can produce substantial amounts of nitrogen through symbiotic or free-living nitrogen fixation (see separate article in this edition). This fixed nitrogen is called Organic Nitrogen because it is made up of nitrogen combined with carbon in various compounds such as amino acids. Organic Nitrogen typically makes up about 95-99% of the Total Nitrogen in the soil and is capable of supplying a substantial proportion of crop needs. However, for crops to make good use of this abundant soil nitrogen supply it must be mineralised (released) into the readily plant-available forms ammonium (NH4+) and nitrate (NO3-) by soil microbes.

With good soil and biology management nitrogen mineralisation can typically release 20-50 kg N/ha and up to around 300 kg/ha or more per month under ideal conditions, to crops. At a price of $230/t N, factoring typical N mineralisation into crop fertilisation budgets equates to savings of around $20-$50/ha or more over a four month period. Furthermore, because nitrogen mineralisation is a microbial process, it increases with soil temperature and moisture, roughly in line with many crops’ nitrogen requirements.

Ask yourself: Would I like $20-$50/ha or more free nitrogen over a growing season, available as a continuous supply as crops need it?

If you answered yes, the best tool you can use to measure how much nitrogen you will actually get and help you improve it over time is N Wise. N Wise gives you the complete picture of what’s happening with the interaction of soil and biology over time and comes with a ready reckoner and simple calculation tool to help you make the most of it.

Not sure which tests to ask for?

Use our selector to find out exactly which tests you need

We’ve designed a selector that will help you choose exactly the right tests to meet your specific requirements: